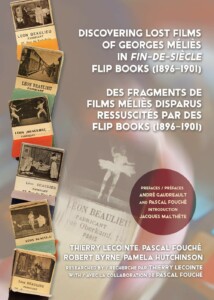 No living person has seen the earliest films of pioneering cinema magician, Georges Méliès. All that remain are his catalogs and a few archival images. The 2013 discovery of a flip book manufactured by an obscure Parisian bimbelotier, Léon Beaulieu, promised a glimpse of an unseen Méliès film. This idea inspired years of investigation by researcher Thierry Lecointe – a trail that led him to collector and historian Pascal Fouché and his amazing collection of more than 10,000 flip books, including 27 produced by the mysterious Beaulieu. The conclusions of Lecointe’s ground-breaking research are astonishing. Léon Beaulieu’s primitive flip books were comprised of images appropriated from early films, many of them lost treasures. Early films by Méliès, but also Gaumont, Skladanowsky and Pathé suddenly came to life after more than a century! This meticulously researched volume reveals how these miraculous discoveries were made and features more than 500 previously unpublished images that you won’t have seen anywhere else.

Read the review by The Guardian:
“What the flip! The chance discovery that’s uncovered treasures of the very earliest cinema”

A conference linked to this publication was to take place at the Cinémathèque française in November 2020 (postponed because of the lockdown):
Méliès inédits, films en papier : le « Cinématographe de poche » de Léon Beaulieu

A fantastic Film Program resulted from this research, presented at the San Francisco Silent Film Festival (Flipping over Early Cinema, May 2, 2019) and at the Giornate del cinema muto (October 5-12, 2019). The animated films can be seen on the SFSFF website.

The book is bilingual English/French, is 272 pages long and contains several hundred illustrations.