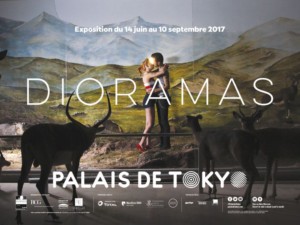 Palais de Tokyo, Paris
14 June – 10 September 2017
From midday to midnight, except on Tuesdays

This exhibition claims that the invention of the diorama in the 19th century represented an “optical revolution, a key moment in the history of performing arts”. It tells the story of what Balzac promoted as “the marvel of the century”, from the Daguerre diorama consisting of a large semi-transparent painted canvas behind which natural or artifical lights would create atmospheric effects, to the pedagogical tools in museums of natural history recreating a three-dimensional scene in a display case composed of a painted backdrop, props and figures, up to its extensions in contemporary art.

We should highlight the special domitorian interest of Jean Paul Favand’s installations entitled Naguère Daguerre, which make use of authentic 19th-century diorama canvases from a fairground theater. In addition to the restoration of these two-sided paintings, Favand provided a recreation of the impact and wonder of Daguerre’s show with digital technology, combining old and new lighting tools such as LED and torches, in order to revive the forgotten performance and apparatus.