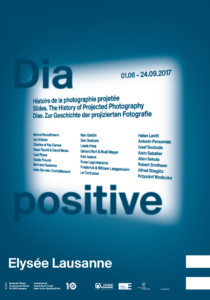 Slides
The History of Projected Photography

The Musée de l’Elysée is presenting one of the first exhibitions devoted to the history of the slide. No prints hanging on the walls this time. In the tradition of magic lanterns, projected photography constitutes an alternative way of spreading images. Popular in the 1850s and used for a long time as a teaching tool as well as for popular entertainment, it first attracts amateur photographers. Some well-known photographers used projections until the 1950s, but it wasn’t until 1960-1970 that the slide really took hold within the artistic community when it was adopted by designers, architects and conceptual artists. The exhibition, organized in four major sections – the light-images, the apparatus, sequence and screening – reveals the uniqueness of the slide. It illustrates the diversity of its practices and its impact on visual culture. The Musée de l’Elysée is indeed proposing a sensorial immersion in the projections (more than 20).

Several works and apparatuses are of special interest for Domitorians: