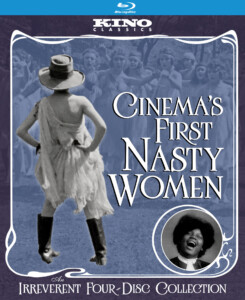 Access the 114-page open access booklet as a PDF (the Blu-ray comes with a beautiful print edition).

Get your copy here ! (US and Canada shipping only – extended shipping arriving soon).

To stay up to dates with news and screenings, consult the project’s page on the Women Film Pioneers Project website.

“A mind-expanding endeavor, the set features 99 mostly comic rarities produced from 1898 to 1926, gleaned from archives and libraries across the globe. It is a triumph of scholarship.” — Manohla Dargis, The New York Times

“It is, quite frankly, the greatest video release of 2022.” — James Neibaur

“This ambitious compilation comes touting an explicit agenda: to reacquaint film history with the silent era’s busy legacy of powerful, disobedient, autonomous women, in films that have been almost entirely neglected up until now.” — Michael Atkinson, Sight and Sound.