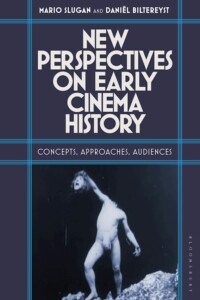 In this book, editors Mario Slugan and Daniël Biltereyst present a theoretical reconceptualization of early cinema. To do so, they highlight the latest methods and tools for analysis, and cast new light on the experience of early cinema through the application of these concepts and methods.

The international host of contributors evaluate examples of early cinema across the globe, including The May Irwin Kiss (1896), Un homme de têtes (1900), The Terrible Turkish Executioner (1904) and Tom Tom the Piper’s Son (1905). In doing so, they address the periodization of the era, emphasizing the recent boon in the availability of primary materials, the rise of digital technologies, the developments in new cinema history, and the persistence of some conceptualizations as key incentives for rethinking early cinema in theoretical and methodological terms.

They go on to highlight cutting-edge approaches to the study of early cinema, including the use of the Mediathread Platform, the formation of new datasets with the help of digital technologies, and exploring the early era in non-western cultures. Finally, the contributors revisit early cinema audiences and exhibition contexts by investigating some of the earliest screenings in Denmark and the US, exploring the details of black cinema going in Harlem, and examining exhibition practices in Germany.

PART ONE: CONCEPTS AND THEORIES

1. Animated pictures according to Georges Méliès: A sober and unpretentious remediation, or when Méliès took a stand against … the cinema! – André Gaudreault

3. ‘The very act itself, even to the smack’: Early cinema, presence and experience – Gert Jan Harkema

4. Lost love on a hot summer day: The absorptive experience of the first film show in Denmark – Casper Tybjerg

5. Revisiting the fiction/non-fiction distinction: Early cinema and the philosophy of imagination – Mario Slugan

6. Using Mediathread for gesture analysis in the cinema of attractions – Danae Kleida

“This outstanding collection, expertly curated by the editors, interrogates the current state of early cinema study by re-examining how we have come to understand this complex phenomenon and suggesting what more there is to leard. Adopting distinct approaches, uncovering novel sources, and providing exciting scholarly discoveries.” (Charlie Keil)

“Fifty years ago, studying the first decades of film claimed a special place in the wider history of cinema. Since then, it has become one of the liveliest and most productive areas for theorising not only old but increasingly also new media, as this welcome collection of new studies demonstrates.” (Ian Christie)