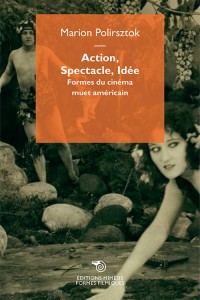 This book studies the “parallel fables” (to use the words of Béla Balázs) which had their heyday in the wake of Griffith’s Intolerance (1916) focussing on five titles: Intolerance itself, the first version of DeMille’s The Ten Commandments (1924) and Curtiz’s Noah’s Ark (1928), which compared biblical narrative and contemporary events; Male and Female (1919) by the same DeMille who incorporated into his modern story a mysterious Babylonian ‘vision’, and the parody of the genre, The Three Ages by Edward Cline and Buster Keaton (1923).

Marion Polirsztok analyzes the aesthetics of these films in terms of what she defines as “Action,” “Spectacle,” and “Idea.” According to her, this aesthetic triad led to the exploration of transitions, and particularly harmonious combinations between “flashing forms” (flash, cut-back, flashback) and “dissolving forms” (fade out, superimposition).