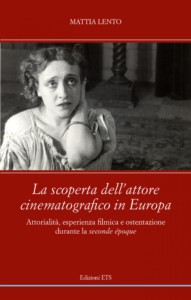 This book entitled The Discovery of the Film Actor in Europe: Acting, Film Experience and Osentation during the ‘Seconde Epoque’ portrays the revolution that occurred in production, distribution and performance with Asta Nielsen’s films in 1910. Mattia Lento delineates the characteristic features of the “seconde époque” cinema, i.e. the european films of the 1910s, a period in which the cinematic institution is engaged in the valorization and negotiation of the novelty created by the actor.

The advent of the actor had hitherto been considered either as a natural consequence of the increasing importance of narration, or confused with the birth of the diva. Combining historical-empirical research, film analysis, film and theater theory, this book aims to shed a new light on a process hitherto underestimated and on a historical moment too often considered as a pure moment of transition between early cinema and classical narrative film. In addition, on the basis of a historical investigation, this research wants to offer new tools of analysis of film acting, which take into consideration not only the action, but also the mediation and reception of the performance.