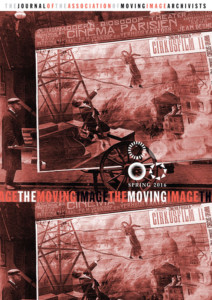 The Moving Image 16:1, “Early Cinema and the Archives”

The Ludic Archive: The Work of Playing with Optical Toys
by Meredith A. Bak

The Beginnings of Cinema as a Museum Exhibit: The Cases of the Smithsonian Institution and the Science Museum in London
by Dimitrios Latsis

Insight and Axioms: Harold G. Brown and the Identification of Early Films
by Sabine Lenk

Ephemera as Medium: The Afterlife of Lost Films
by Paul S. Moore

Méliès’s Voyage Restoration: or, The Risk of Being Stuck in the Digital Reconstruction
by Martin Bonnard