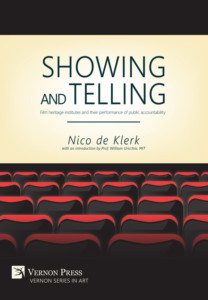 Showing and Telling is an academic study portraying how publicly funded film heritage institutes account for their mandate in their public activities. It does that by inspecting and evaluating public presentations and visitor information about these presentations. The research was done by juxtaposing two approaches. The first is grounded in the author’s experience as a collection researcher and curator and makes a case for the richness of archival objects usually ignored for their lack of aesthetic qualities. The second is a survey of the public activities of 24 institutes worldwide, based on their websites, in February 2014.

This work aims to uncover a disconnect between the curatorial activities of these institutes and their missions. The central argument is that publicly funded film heritage institutes give their public an inadequate sense of cinema history. According to Nico de Klerk’s study, they offer by and large a mainstream-oriented repertoire of presentations, overwhelmingly consisting of feature fiction; they show a disproportionate amount of recent and new works, often through commercial distribution; their screenings consist of an unexplained melee of technological formats (sometimes substandard); and their presentations monotonously frame film as art, although their professed aesthetics are mostly of a cinephile nature and rest on received opinion. The author considers that specific materials, early cinema in particular, and specialist knowledge, both historical and methodological, are largely restricted to their network of peer communities. He concludes that wholesome transfer of full knowledge, in word and image, to the public is not a major concern of these institutes.