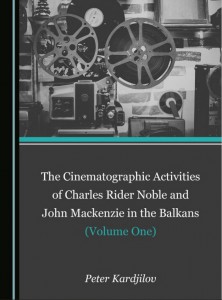 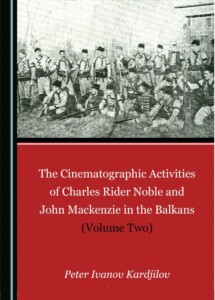 In the early 20th century, the American film producer Charles Urban, who had founded his company in London, sent two of his camera operators out to the Balkans. The Englishman Charles Rider Noble recreated moments from the uprising that had broken out in Macedonia (part of Turkey at that time) and filmed all over Bulgaria, while the Scot John Mackenzie travelled through Croatia, Montenegro, Bosnia and Herzegovina, Serbia, Bulgaria and Romania. As such, thanks to these two Britons, the first sequences of living pictures were filmed in the peninsula from 1903 to 1905. This book deals with this under-researched period, examining in depth, diligently and in detail over 1,200 sources of information (including newspaper reports, film catalogues, and archives).

Volume Two is out since October 2020! Following on from the first, it details the engrossing story of the two camera operators sent out to the Balkans by Urban. The first of them, the Englishman Charles Rider Noble, filmed as many as 38 short living pictures in Bulgaria in 1903 and 1904. The second, the Scot John Mackenzie, travelled with his bioscope through Croatia, Montenegro, Bosnia and Herzegovina, Serbia, Bulgaria and Romania in 1905. Thus, thanks to the two Britons, the first sequences of films depicting the landscapes, historical and archaeological monuments, architectural landmarks, cultural traditions and ethnographic features of the region, as well as some of its public events of the time, were shown in the peninsula. This book provides an exciting trip ‘through savage Europe’, tracing the amazing adventures of its ‘main characters’ and their life paths to their very end.

Therefore, the two volumes make absorbing reading, while preserving their status as unique scientific works, intended for film historians, early cinema researchers, film and television archives experts, college and university lecturers, students and schoolchildren. They will be of interest to everyone who, regardless of their age, loves the ‘Seventh Art’ and adores the secrets its early history still holds.

Read the review by Ana Grgić