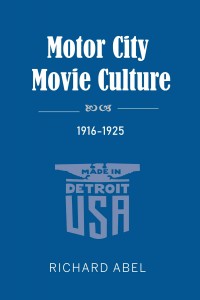 Motor City Movie Culture, 1916–1925 is a broad textured look at Hollywood coming of age in a city with a burgeoning population and complex demographics. Richard Abel investigates the role of local Detroit organizations in producing, distributing, exhibiting, and publicizing films in an effort to make moviegoing part of everyday life. Tapping a wealth of primary source material—from newspapers, spatiotemporal maps, and city directories to rare trade journals, theater programs, and local newsreels—Abel shows how entrepreneurs worked to lure moviegoers from Detroit’s diverse ethnic neighborhoods into the theaters. Covering topics such as distribution, programming practices, nonfiction film, and movie coverage in local newspapers, with entr’actes that dive deeper into the roles of key individuals and organizations, this book examines how efforts in regional metropolitan cities like Detroit worked alongside California studios and New York head offices to bolster a mass culture of moviegoing in the United States.

“Richard Abel takes us into the unexplored and unexpectedly rich terrain of Detroit at the beginning of the twentieth century. We learn that the teeming, multicultural metropolis was famous for its cigars as well as its cars, and that moviegoing and even some fledgling movie production were thriving. With his distinctive literary voice, Abel talks us through volumes of rare documents and ephemera, revealing for the first time the trove that exists in numerous archives and private collections, sharing his infectious curiosity, and inviting us on his personal journey through the Motor City’s movies.”

“Motor City Movie Culture is a sharp continuation of the thrust of Abel’s last few books into the Hollywood era. Narrowing the focus onto a major city—Detroit—Abel tackles a full decade when daily newspaper publicity made fandom for movie stars habitual. Motor City Movie Culture explains how metropolitan newspapers became essential channels for Hollywood publicity—not just conduits but partners with first-run theater chains, anchoring the studio system regionally. One of 30 regional hubs for film distribution across the US, Detroit’s showmen built their city a theatre district of lavish movie palaces at Grand Circus Park, surrounded by a dozen neighborhood zones each with their own palaces. Previous scholarship on film exhibition in the 1920s has emphasized the end of local control and the loss of regional distinctions. Abel confirms how studio-controlled first-run theaters were reliant on local networks to add regional twists.”

“Offering the same extraordinary attention to detail and richly ambitious scope that have characterized Richard Abel’s justly acclaimed studies of American silent cinema in the 1900s and 1910s, Motor City Movie Culture unearths and makes sense of a wealth of new information about Detroit, providing an important perspective on film exhibition and film production in metropolitan America during the late ‘teens and 1920s.”