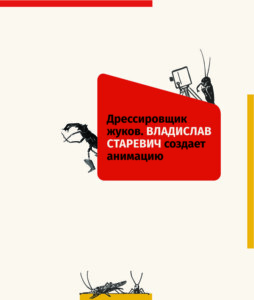 The Bug Trainer: Vladislav Starevich Creates Animation is the first book in Russian about the life and work of film director Vladislav (Ladislas) Starevich (1882-1965), who made innovative films using puppet animation. The figure of Starevich occupies a special place in the history of early Russian cinema: for a long time he has been called “the father of Russian animation”, as well as one of the main Russian masters of special effects filming in the 1910s, one of the very few in the country who designed and created special effects, which astonished his contemporaries, colleagues as well as spectators.

This collected volume fills in the gaps in the director’s biography and includes rare and never before published illustrations that not only reveal the production history of his famous animations, but also reconstruct the history of those films that have not been preserved: they include surviving stills, advertising materials, librettos, etc.

More information on the publisher’s page.