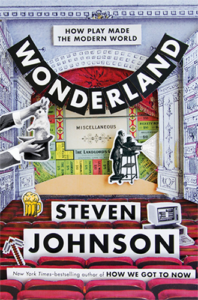 In his new book, Steven Johnson argues that the pursuit of novelty and wonder has always been a powerful driver of world-shaping technological change. He highlights how the overwhelming majority of devices such as the ones portrayed in the ninth-century Book of Ingenious Devices are objects of amusement and mimicry — are toys. Devoting one chapter to the visual illusion industry (panoramas, phantasmagorias, magic-lantern shows, cinema), he finds that throughout history, the cutting edge of innovation lies wherever people are working the hardest to keep themselves and others amused.

Review excerpt by Sam Leith entitled “The importance of being frivolous”:

“In Wonderland, the author of Everything Bad is Good for You: How Today’s Popular Culture is Actually Making Us Smarter advances another slickly counterintuitive hypothesis. It is that one of the most important drivers of human progress is fun, leisure, novelty, the impulse to delight: aka, mucking around. The utilitarian account of human progress, he argues, concerned chiefly with work, market efficiencies and the hierarchy of basic human needs such as shelter, food and nookie, misses several tricks.

The breadth and suggestiveness of Johnson’s thesis is a strength but also a weakness, and there’s a good deal of cherry-picking and post-hoc-ergo-propter-hockery at work. Or, at least, a sense that if an idea seems to rhyme with another it can be chalked up as a win for the author’s thesis. . . . But the salmagundi of anecdotes and examples makes this book rich, [such as] the suggestive argument Johnson makes in his conclusion that it isn’t play, exactly, so much as surprise or novelty that our brains respond to with such pleasure and interest. Here’s the at least cursorily neuroscientific argument that fun is not a marginal or unserious activity, but some sort of evolutionary desideratum.

So even if you don’t buy the central thesis — or, rather, if the central thesis, like the illusion from an 18th-century phantasmagoria, seems so tenebrous and smoky as to resist pinning down — there is a fabulous amount here to be surprised by and interested in. It’s a book about delight that is itself delightful.”