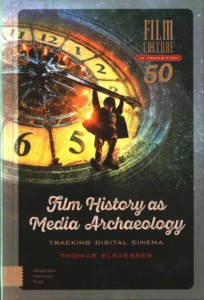 Since cinema has entered the digital era, its very nature has come under renewed scrutiny. Countering the ‘death of cinema’ debate, Film History as Media Archaeology presents a robust argument for the cinema’s current status as a new epistemological object, of interest to philosophers, while also examining the presence of moving images in the museum and art spaces as a challenge for art history. The current study is the fruit of some twenty years of research and writing at the interface of film history, media theory and media archaeology by one of the acknowledged pioneers of the ‘new film history’ and ‘media archaeology’. It joins the efforts of other media scholars to locate cinema’s historical emergence and subsequent transformations within the broader field of media change and interaction, as we experience them today.

Some endorsements by Domitor members:

“With its 50th installment, the Film Culture in Transition book series edited by Thomas Elsaesser for Amsterdam University Press, reaffirms its position as one of the most important and indispensable venues for film and media research in English language academic publishing. With its ground-breaking monographs and edited collections, the series has been driving the debate in our field for more than two decades now. ‘Film History as Media Archaeology’ illustrates the virtues and qualities of the series in exemplary fashion: A wide-ranging re-assessment of established approaches to film historiography in the light of the challenges offered by digital cinema, the book offers a pivot away from an exclusive focus on the study of canonical works to an understanding of film history as a vital thread of a broader history of media, digital and otherwise. Like so many of the previous volumes in the series, volume 50 is bound to establish itself as a text of reference in contemporary film and media scholarship.”

“As the field of Film Studies has morphed into Media Studies, no one has better grasped the consequences and opportunities for scholarship than Thomas Elsaesser. He has deftly managed to keep the whole equation of film and media studies in his head, both in his own work and as Film Culture in Transition’s series editor. The result is nothing less than an ongoing tour de force as he analyzes contemporary Hollywood cinema in one book, film theory in another, and various permutations of German cinema in still others. Continuing his commitment to Early Cinema, Elsaesser’s most recent publication rethinks the terms of film history within a broader framework of media archaeology–a call that has already generated a new, vibrant arena of research and erudition. Not only is Film History as Media Archaeology impressive in its own right, as the 50th volume in “Film Culture in Transition”, his book series with Amsterdam University Press, Elsaesser has deployed his acumen and rigor to nurture, shape and inspire a generation (or two) of scholars.”