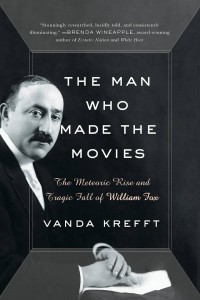 Although a major Hollywood studio still bears William Fox’s name, the man himself has mostly been forgotten by history, even written off as a failure. Now, in this biography, Vanda Krefft corrects the record, explaining why Fox’s legacy is central to the history of Hollywood.

Growing up in Lower East Side tenements, the eldest son of impoverished Hungarian immigrants, Fox began selling candy on the street. That entrepreneurial ambition eventually grew one small Brooklyn theater into a $300 million empire of deluxe studios and theaters that rivaled those of Adolph Zukor, Marcus Loew, and the Warner brothers, and launched stars such as Theda Bara. Amid the euphoric roaring twenties, the early movie moguls waged a fierce battle for control of their industry. A fearless risk-taker, Fox won and was hailed as a genius—until a confluence of circumstances, culminating with the 1929 stock market crash, led to his ruin.

According to Marc Lapadula (Yale), this study of one of cinema’s true founding father “not only has revealed William Fox’s personal life narrative but also has crafted the origin story of the U.S. film industry.”
Editor’s website