As cinemas and theatres have closed down around the world due to the Covid-19 pandemic, as more and more of us get used to the idea of quarantining at home, film historian Steve Massa and musician Ben Model have launched the “Silent Comedy Watch Party” on YouTube. 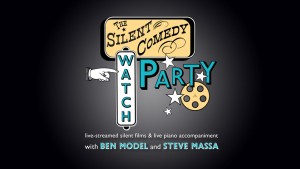 The new exhibition format adapts the silent film experience with live music accompaniment to the new modes of “liveness” popularized by online streaming platforms and demanded in times of Coronavirus. As Model explains at the start of Episode 1, one can easily watch silent films in Blue Ray or on streaming platforms, “but there’s something about the silent film experience, about the live experience of having . . . the live music—it’s partially a performance that makes it a specific and special experience.” Silent Comedy Watch Parties comprise three on-screen components—literally “on-screen”—as Model and his piano appear on our computer screen, Massa introduces the films from a smart phone screen (held on a tripod operated by Model’s off-screen wife, Mana), and the films are projected on a wall-screen.
Episode 1 comprised three short comedies: Shot in the Excitement (Rube Miller [?], 1914), Meet Father (Jess Robins, 1924), and An Eye for Figures (?, 1920). 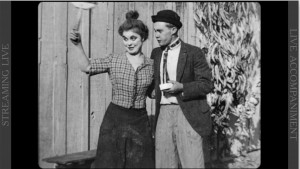 With the attractional flare of the comedic couple made up of Alice Howell and Al St John, Shot in Excitement would have certainly caught the eye of a Domitorian. Howell and St John “make a wonderful team and it’s too bad they didn’t do more together,” notes Massa, introducing the film. Preserved by the Library of Congress from a paper print, Shot in Excitement—its chases, stumbles, and mishaps—become irresistible with Model’s cheerful piano accompaniment. The other two films, Meet Father and An Eye for Figures were courtesy of respectively the USC Hugh M. Hefner Moving Image Archive and Undercrank Productions.

The next “Silent Comedy Watch Party” will be streamed live on Sunday March 29 on YouTube at 3pm EST—we can’t wait to discover what episode 2 holds for us! Stay tuned for more information about early films online!