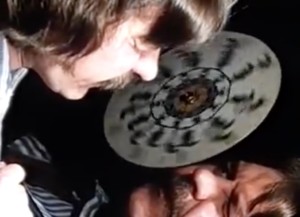 Werner Nekes in Film Before Film. Reproduced from Media Magica I, directed by Werner Nekes (1986), DVD.

In a recent article published in The Moving Image, Meredith Bak makes the convincing case for thinking about “play” both as a key dimension of the experience of pre-cinematic optical toys—devices that used play as a technique of education (see also Steven Johnson’s Wonderland)—and as a method of researching them. Writing about working with pre-cinema collections, she asks, “What exactly does it mean to play with these toys in the archival context?” [1] For Bak, pre-cinema research is enriched and expanded by experiential methods—like assuming the role of users—that promote improvisation and experimentation. The idea gets at something essential to the work that many historians, artists, archivists, curators, and collectors do: handling artifacts involves an open-ended-ness that can lead to innovative and surprising ways of seeing, thinking about, and interpreting the past. The experience may be a familiar one, but it got me thinking about something unexpected: What might a model of play afford in the context of teaching pre-cinema and early film history? 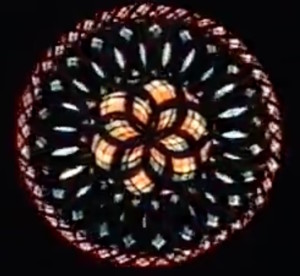 An animated chromatrope. Reproduced from Media Magica I, directed by Werner Nekes (1986), DVD.

I pose the question because, increasingly, I find myself returning to my first encounter with early cinema studies for insight into how to connect students in meaningful ways to film history. As an undergraduate student in a film history course taught by Peter Bloom, I watched Film Before Film (Was geschah wirklich zwischen den Bildern, 1986), the first installment of the Media Magica series by experimental filmmaker and collector Werner Nekes, who passed away earlier this year. Media Magica is an animated encyclopedia of objects taken from Nekes’s vast collection of optical devices and related ephemera. What struck me was the spirit of wonder that Nekes brought to displaying his collection as a site of serious research and an opportunity to play with the mesmerizing movements, metamorphoses, and illusions of optical devices. As part of the course, I also had the great opportunity to visit the Getty Research Institute, where Frances Terpak and archivists guided students through a hands-on experience of objects from the Nekes collection, which had been assembled in a way that transformed the reading room into a dizzying cabinet of curiosities. (This model was the basis for related exhibitions at the Getty Museum, the Australian Centre for the Moving Image, and the Hayward Gallery in the early 2000s.) Encountering the physical objects in this way, I experienced the cinema for the first time as part of an unfamiliar constellation of media and discourses spanning centuries. I also began to understand how deeply such objects are rooted in their historical contexts, and how so-called old media have strange afterlives—“sensual ancestors,” as Barbara Stafford puts it—that extend well beyond the horizons of their original uses. The encounter was quite formative—I can trace the close relationship I now have with early cinema studies and media archaeology to watching Media Magica and operating a box-form camera obscura at the Getty Research Institute.

Granting that such opportunities and experiences for students may be rare, particularly at the undergraduate level, I’m interested in thinking broadly about what the “devices of wonder” we work with can teach us about teaching in our field. Sean Cubitt makes a helpful point along these lines when he writes of Nekes’s optical toys,

While it is legitimate to place these devices in the past of cinema, it is misleading to try to keep them there to the exclusion of […] other histories. Their abiding fascination is about the possibility of playing with them in the present, about the disorienting dislocation we experience when confronting once-familiar, now forgotten, relics of the recent past, about their difference from contemporary media as well as their similarities. [2] 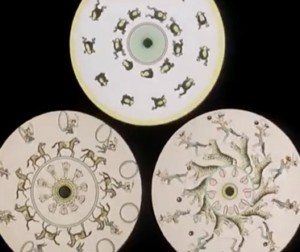 Nekes explored this in his film-making and collecting by creatively combining the old and the new in ways that rendered  both categories unfamiliar and mutually illuminating. (Thomas Elsaesser speaks of something similar when he calls for a “hermeneutics of astonishment” in which scholarly research is animated by the same “wonder and disbelief” that historical film and media generated in their original contexts. [3]) There is a pedagogical value in this kind of creative work with objects and ephemera that I find at once compelling and elusive. For example, what specific forms—e.g., projects, exercises, object lessons, etc.—might “playing with” pre-cinema and early film history take in the classroom? How can that play be balanced with rigorous historical inquiry to create experiences that are productive and impactful for students? And, especially given recent trends in higher education, cinema studies, and the digital humanities (the classroom applications for the Media Ecology Project come to mind), what roles can new media and “making,” “interactivity,” “collaboration,” and “creativity” play in how students learn about early cinema?

In my own film history courses, I have started assigning students traditional research papers alongside creative projects, like making short trick films and developing multi-media dossiers with digital animations of chronophotographs and pre-cinematic media. I am curious to know if and how members of the Domitor community are experimenting or have experimented pedagogically along these lines, generally as a way of engaging students in the classroom and specifically in the service of promoting student involvement in early cinema studies. I write this admittedly from a place of nostalgia marked by Nekes’s passing but also in the hopes of opening up a dialog about how we can continue to create opportunities for students to be inspired by the “disorienting dislocations” that, I imagine, initially drew Nekes and many of us to the study of early cinema.

[2] Sean Cubitt, “Observations on the History and Uses of Animation Occasioned by the Exhibition Eyes, Lies and Illusions Selected from Works in the Werner Nekes Collection,” animation: an interdisciplinary journal 3, 1 (2008): 53-54.