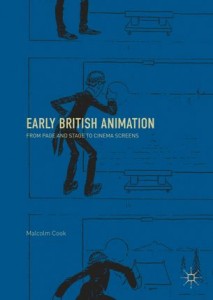 This book is the first history of British animated cartoons, from the earliest period of cinema in the 1890s up to the late 1920s. In this period cartoonists and performers from earlier traditions of print and stage entertainment came to film to expand their artistic practice, bringing with them a range of techniques and ideas that shaped the development of British animation. These were commercial rather than avant-garde artists, but they nevertheless saw the new medium of cinema as offering the potential to engage with modern concerns of the early 20th century, be it the political and human turmoil of the First World War or new freedoms of the 1920s. Cook’s examination and reassessment of these films and their histories reveals their close attention and play with the way audiences saw the world. As such, this book offers new insight into the changing understanding of vision at that time as Britain’s place in the world was reshaped in the early 20th century.

Review by the Domitor member Don Crafton: “Malcolm Cook in this book emerges as the preeminent historian of early British animation. But, as if that were not saying enough, he also interjects his distinctive voice into an erudite, yet entertaining, discourse about a body of filmmaking heretofore ‘largely forgotten and unloved’. More than a simple chronicle, Early British Animation weaves a powerful narrative of talented, often obsessive, artists and their relation to the establishment and avant-garde art movements of their day. We can’t say whether or not future generations will love British animation, but they will no longer be able to forget it.”