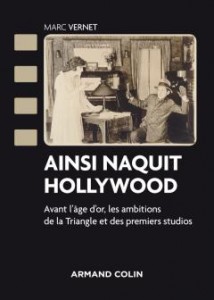 Based on the Triangle Film Corporation archive, this study traces back the brief and hectic history of this pioneering Hollywood company and, through it, of the earliest studio settlements in Los Angeles during the first half of the 1910s. Marc Vernet describes the decisive mutations which occurred at the time when ‘the movies’ were being invented and settled – in transition from East to West, from short to long features, from local industries to national strategies, from natural to artificial lighting, from European prestige to the Americanization of cinema.

Illustrated by exceptional documents, this book sheds light on the dynamics and logics which created Hollywood, in a context of high economic growth and serious political instability. It shows that this era was crucial for film emulation, with the rise of stars taking charge of their own careers, the fierce competition between producers, distributors and exhibitors, and also between Griffith, Ince, Sennet, DeMille…