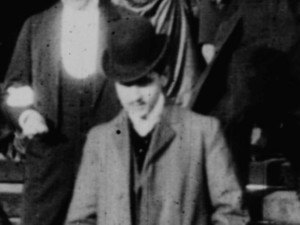 Marcel Proust has been identified in a 1904 film

DOMITOR congratulates Jean-Pierre Sirois-Trahan, Domitor member, who in his article of the Revue d’études proustiennes argues that Marcel Proust has been captured on film while leaving the 1904 wedding of the daughter of the Countess Greffulhe. While this identification of Proust has already been assumed by Laure Hillerin in her 2014 biography of the Countess Greffulhe, and relayed by the 2016 exhibition “La Mode Retrouvée” at the Musée de la Mode de la Ville de Paris,* Sirois-Trahan gets into a detailed and compelling argument, creating a phenomenal “buzz”. From the New Yorker to Le Monde, everybody – and above all the Proustian Community – marvel at the find and comment on the “power” of early film to “Regain Time”…

More information about the special review issue about Proust and the Media in which Sirois-Trahan’s article is published here.

*Thanks to the Domitor member François Amy de la Bretèque for this information.