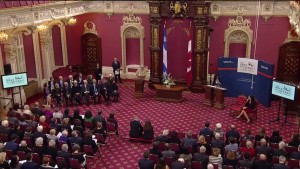 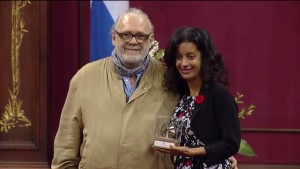 Last November 1st, Domitor co-founder and first elected President André Gaudreault was awarded the prix Léon-Gérin, the highest distinction awarded by the Quebec government to a researcher, for life-time achievement in the field of humanities or social sciences.

The Deputy Premier of Québec, Mrs. Dominique Anglade, introduced the recipient by praising his “concept of cinema of attractions, developed in 1985 with Tom Gunning, who was at the time [a] professor at Harvard University.” Recontextualizing this “key concept” in the awardee’s broader work “on narrative, technology and public entertainment,” the Deputy Premier highlighted this work’s “illuminating connections between past and present” and its “exceptional contribution to the emergence of cinema studies.”

Lastly, the Deputy Premier’s tribute to how Gaudreault “contributed to founding numerous research groups . . . bringing together collaborators from everywhere on the planet,” notably referred to “the Domitor Society, which plays a leadership role in early cinema studies.”

On behalf of the entire Domitor Society, early cinema scholars, and film studies more broadly, a discipline which, to quote the recipient’s speech, “this Quebec Award cast as recognized human and social sciences,”we express our highest praise, pride, and gratitude to André.